An Examination of the Practice of Ordination in Southern Baptist Churches

You are here: Home / An Examination of the Practice of Ordination in Southern Baptist Churc...

What are the origins of Baptist Ordination?

Ordination has always been an important ritual in most churches and denominations, particularly Southern Baptists churches. But where did the practice of baptist ordination originate? Does ordination have any biblical basis? Can we point to Scripture passages that define the why and how of ordination?

This book attempts to answer those questions, examining both the traditional and biblical backgrounds. For those searching for answers on ordination, this book will help you get started on your quest.

Burning questions concerning ordination have called Baptists to search for biblical answers. Some of these questions have been: What is the meaning and purpose of ordination? What significance, if any, is the practice of the laying on of hands? Who should be ordained? Should women be ordained? Should ministers of music, education, or youth be ordained? As provocative as these questions may be, a systematic study of Old Testament precedents and New Testament prototypes should be less susceptible to distortion than an issue-oriented approach. (from An Examination of the Practice of Ordination in Southern Baptist Churches, Chapter 5)

This book has been extensively researched and fully noted. Also included is a large annotated bibliography, for conducting your own research. An Examination of the Practice of Ordination in Southern Baptist Churches is a tremendous source on the topic of ordination. 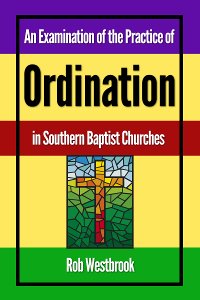