A Corporate Prayer Plan for the Church Using Prayer Stations

You are here: Home / Blog / Blog / A Corporate Prayer Plan for the Church Using Prayer Stations 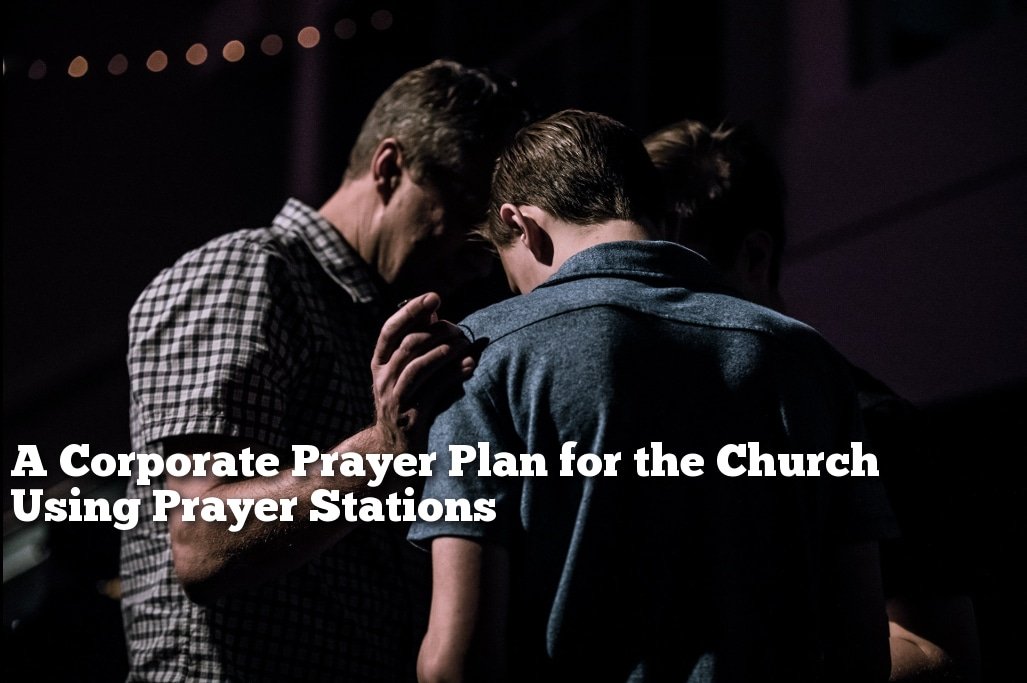 Bringing the Church Together for Focused Prayer

Jesus tells us there is power available when the people in our church gather and pray together.

Again I say to you, if two of you agree on earth about anything they ask, it will be done for them by my Father in heaven. For where two or three are gathered in my name, there am I among them.

Many of you have Wednesday Night prayer meetings. In my first church, we did, as well. I really enjoyed the time together with the church, but I grew frustrated with the “prayer” part.

I don’t know how you do Wednesday Nights, but we would open up the floor for prayer requests. Sometimes the requests were for serious needs. But, often they would become “not so serious” requests.

Now, I certainly don’t want to make light of prayer and a person’s need for prayer. I don’t believe there is anything too large or too small to petition the Lord for. But praying for Aunt Mildred’s cat’s fur ball problem may not make the most of our corporate prayer time.

Anyway, after we spent a great deal of time taking prayer requests, I’d open the floor for anyone who felt led to pray to start. The usual four to five people would pray. Some prayers were short while others were looooong. When I sensed no one else would be praying, I’d close out the session with my own prayer. We would then move into either a short message or a Bible Study.

That was our “prayer meeting.” This may be yours, too.

The prayer time in these groups pretty much went just like the prayer meetings at my first church, only on a smaller scale. There was more openness in the groups but the prayer time usually just got tacked on somewhere near the end of the group meetings.

Both models had their positives and negatives. But, as far as prayer was concerned, both models were severely lacking.

The Missing Element in Corporate Prayer

What was missing in our prayer and small group meetings and what may be missing in yours can most likely be summed up in one word.

Prayer was not a focus. The problems, needs, and praises shared were the focus. Or the Bible study. Or the food at the group gathering. What was leading up to a minute of prayer was the 15-30 minutes of talk and discussion BEFORE prayer. That was the focus.

How could I shift the focus to spending time together seeking God’s face about specific needs and concerns? How could I lead people to concentrate on our Lord of mercy and grace for an extended period of time?

I began to brainstorm ways for focusing our church on specific prayer concerns. I read books and researched the internet for suggestions and directions for authentic corporate prayer. I took all these sources and developed my own plan for focused corporate prayer. That plan is what the remainder of this post will outline.

A Corporate Prayer Plan for the Church

Focusing on prayer means removing anything that competes with our prayer time. So there should be nothing else occurring, at least leading up to, and during the time of prayer. I could either have a time of prayer on a different day than our regular Wednesday Night Prayer Meeting, or replace our prayer meeting format entirely.

Getting people to come to a church event on Wednesday night, let alone another night of the week is a feat in itself. So I went with the option of replacing our prayer meeting format entirely. But not every Wednesday night.

We set aside one Wednesday night per quarter for focused prayer time. I put in a lot of time preparing for that night so that when people did come, they had a night free of distractions.

I prepared an agenda so there was guided direction for our prayer time. This agenda contained specific prayer points to lead our people to pray.

Our people were separated into groups and each group rotated through each prayer station. Their prayers were directed by the focus prayer point at that station.

So there’s an explanation of what led me to this plan. And a very brief overview of the plan. Now I want to show you how this plan practically played out.

The Prayer Plan in Action

I’m going to lay out the plan as bullet-points. This can serve as a “to-do list” should you decide to give this plan a try.

Of course, being Baptist, we always had some food or snacks afterward! But you may really want to consider a short time of fellowship after the time of prayer. It gives people time to decompress and share their prayer experiences. I always found this “after” time exhilarating as people basked in the warmth of being before the Lord. There was always much joy in the room.

(Hover over this image to share this article on social media)

What follows are some examples of the prayer points I’ve used during our prayer meetings. I hope these will give you more direction and explanation about what we were praying for.

There are examples from three different prayer meetings. I refer to them as sessions.

I’ve put these sample prayer points into PDF files. There are buttons at the bottom of this post for downloading them.

I’ve added a bit of commentary on each session to give a little detail to each one.

Each prayer station agenda in this session centered around a specific point in our church vision statement.

We envision sharing the good news of Christ’s death and resurrection with thousands of unchurched family members, friends, and others in our local area, with many trusting Him as Savior and Lord.

We envision helping all our people – youth as well as adults – to discover their divine designs so that they are equipped to serve Christ effectively in some ministry either within or outside our church. Our goal is that every member be a minister.

We envision becoming a church where our people model biblical community: a safe place where we accept one another and are accepted, love and are loved, led and are leading, encourage and are encouraged, forgive and are forgiven, and serve and are served.

We envision welcoming many members into our body who are excited about Christ, experiencing life-change through our worship, discipleship, and Life Groups, and growing together in love.

This prayer meeting was held shortly before Easter.

God put our Church in this exact location – in this exact town – for a reason. He wants to build together a group of individuals into a real community who love one another, support one another, and watch after one another with the love of Jesus Christ. He wants His church to be so attractive with His love that others will also want to be a part of what He is doing in us.

This prayer meeting was held as the new school year was starting in the fall.

Our schools should be a key focus of our prayers. Our children will spend almost as much time in school as at home. This makes the schools, the teachers, and the other students a prime means of influence on our children. How our children react and respond to the school environment will affect them for the rest of their lives.

Our children are our most precious gifts from God. As they enter school, they will be in the midst of people who have no regard for our God, Jesus, or love for our children. They will be exposed to things that may lead them away from Jesus. Every day they will be surrounded by people who are influenced by the world’s values and the Evil One. They will also have great opportunities to represent Jesus to everyone around them.

What do you think about this Corporate Prayer Plan?

I’ve found this plan to be an excellent way of getting the church involved in focused corporate prayer time. This plan also enhances the importance of prayer in the life of the church. It would fit nicely into a sermon series on prayer, such as my 40 Days of Prayer series.

What are some ways you’ve found that lead to more focused corporate prayer?

Please share any questions, suggestions, or your own plans in the comments below. I look forward to your participation.

Expository Preaching and Improving Your Preaching